Where was the National Capital?

The Articles of Confederation and the Wandering Congress

On June 21, 1783, five hundred angry soldiers surrounded Congress as it sat in session in the State House (now Independence Hall) in Philadelphia.  They shouted curses, brandished bayonets, and demanded back pay.  Making matters worse, some of the local tavern keepers either supported the soldiers, or were intimidated into doing so.  In the quaint words of James Madison, “spirituous drink from the tippling houses began to be liberally served out to the soldiers, & might lead to hasty excesses”.

No member of Congress needed to be told what these “excesses” might be.  The century before, England itself had rebelled against the Crown, and an army led by Oliver Cromwell had led Parliament to victory.  After the war, Cromwell’s army—disgruntled over the same lack of pay—had purged Parliament and set up a military dictatorship.  Was the United States about to undergo a military coup? 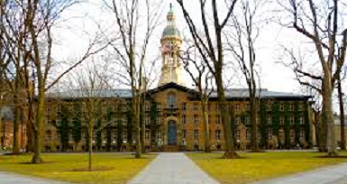 The First Continental Congress assembled in Philadelphia in 1774, simply because Philadelphia was a large city near the midpoint of the thirteen rebelling colonies.  When Congress declared independence two years later, Philadelphia became the national capital, although few used the word at the time. Philadelphia was just "the place where Congress met", and Congress at that time was the entirety of the federal government.

During the Revolutionary War, the British twice threatened and once occupied Philadelphia, forcing Congress to flee to Baltimore and then to York, Pennsylvania.  Congress finished drafting the Articles of Confederation in York (see Drafting the Articles).  The Articles said nothing about a national capital and reserved to Congress the power to  "adjourn to any place within the United States".

By the time the Articles were ratified (March 1781), the war had moved elsewhere and Congress had returned to Philadelphia, and would have been happy to stay there--especially after the coming of peace in 1783.  But, the soldiers in June of that year were frightening.  The government of Pennsylvania offered little in the way of protection.  On June 24, 1783, Congress determined to flee to the nearest public building outside of Pennsylvania which was available on short notice, which turned out to be Nassau Hall (above right) on the grounds of the College of New Jersey (now called Princeton University).

Princeton proved to be pleasant—and safe—enough, but it could not be more than a temporary home.  The accommodations were more suited to college students than to members of Congress, and it would hardly impress foreign ambassadors who were reporting to the United States in increasing numbers.  Congress would move to a larger city, but which one?  Only a two-city package could secure a majority of states in support, so Congress voted to alternate between sitting in Annapolis, Maryland, and Trenton, New Jersey. 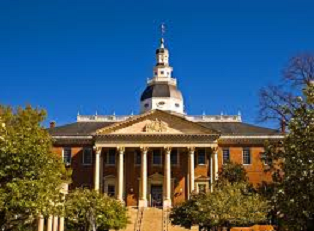 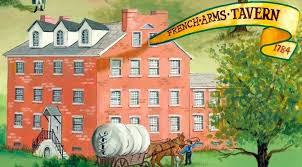 Congress, however, was no longer the whole of the federal government.  In 1781, Congress had created Executive Departments.  As Congress relocated, its executive departments sometimes relocated with it, sometimes not.  The Office of Finance, with a substantial staff, remained in Philadelphia.  Some members of Congress applauded this separation.  Arthur Lee of Virginia, who hated Superintendent of Finance Robert Morris, celebrated that Morris' influence "has manifestly diminished since the removal (of Congress) from Philadelphia, and the fixing of Congress in any other place will I hope restrain it in due bounds".  Nevertheless, separation did not conduce to efficient government, nor to a stable civil service.  In 1784, Congress wished for John Jay to become Secretary of Foreign Affairs.  Jay refused unless Congress settled on a single capital.  Congress wanted Jay badly enough that it acquiesced, and voted on December 23, 1784 to meet in New York beginning in January, 1785.  Trenton had served as the capital for less than two months.

One must not view this travel as evidence that nobody wanted Congress.  On the contrary, everybody wanted Congress.  New Jersey resolved that it was “highly honored by the presence of Congress”.  Rhode Island offered Newport as the federal capital.  Philadelphia begged Congress to return.  The frequent relocations resulted from the push and pull of Congressional politics.

In hindsight, nevertheless, the abandonment of Philadelphia in 1783 was a mistake.  George Washington was not Cromwell, and the blustering soldiers sobered up and apologized within a day.  Congress appeared weak and fearful in fleeing.  The subsequent relocations wasted time, exacerbated the problem of Congressional attendance, and lowered the prestige of Congress.

Congress under the Constitution of the United States (COTUS) finally returned to Philadelphia in 1790, and voted to build a new and permanent capital on the banks of the Potomac between Virginia and Maryland.  The resulting city of Washington became the national capital in 1800.

© 2019 Clionic Enterprises | Back to Home Page | Back to Interesting Things |